Pictured, there are some busy times last week on TH29 running through downtown Starbuck. On Tuesday one could see workers from Creative Curb pouring concrete sidewalk in front of the Nutcracker Cafe, two paving machines from Central Specialties putting down the first mat of bituminous, and just to their rear, a small backhoe from Design Electric digging a foundation for a street light pole. TH29 will open Thursday between 1st Street and 6th Street.

Starting Thursday, July 2, motorists will encounter new road closures and detours in the City of Starbuck, as crews finish up the first stage of construction for the 2020 resurfacing and reconstruction project on Highways 28, 29 and 114. Highway 29 south from First Street to Sixth Street will open to traffic, and traffic will be detoured to Wollan Street and Sixth Street.

Crews will return on Monday, July 6 to begin stage two of construction. For the second stage, the main intersection of Highway 28, 29 and 114 will close, up to Eighth Street on Highway 114. North and southbound traffic on Highway 114 and Highway 29 will be detoured to Sixth Street, Abercrombie Street and East Eighth Street. East and westbound traffic on Highway 28 will be rerouted to Wollan Street, Sixth Street and Abercrombie Street.

Paving of TH29 was partially completed last week but the street will it remain closed because subcontractors will have work to do the first part of the week and will have a lot of equipment on the street.

Some street light pole foundations need to be completed and grass and pavers need to be placed and planted in parts of the sidewalks. The highway will also need to be striped.

Detours through Wednesday remain the same, Wollan Street to 1st Street for cars and light trucks.

Stage 2a will begin Monday, July 6, with pavement removals. Pavement will be removed from the intersection of Highways 28, 29 and 114 and a half a block east on TH28, one block west on TH28, and up to 8th Street to the north on TH114. The remaining two blocks of Stage 2 west of Wollan Street will be done later.

Access to Casey’s will be from the south from 6th Street. Access to Minnewaska Real Estate and Hair Mix will be from a local access only route on TH28.

The third stage of construction will take place on Highway 28 east of the main intersection to Teigen Street, with a detour to County Road 24 and Highway 114.

For more information and detour maps, and to sign up for project email updates, visit the project website: mndot.gov/d4/projects/starbuck.

For real-time traffic and travel information in Minnesota, visit www.511mn.org or get the free smartphone app at Google Play or the App Store.

The Stage 2a detour route can be seen below. 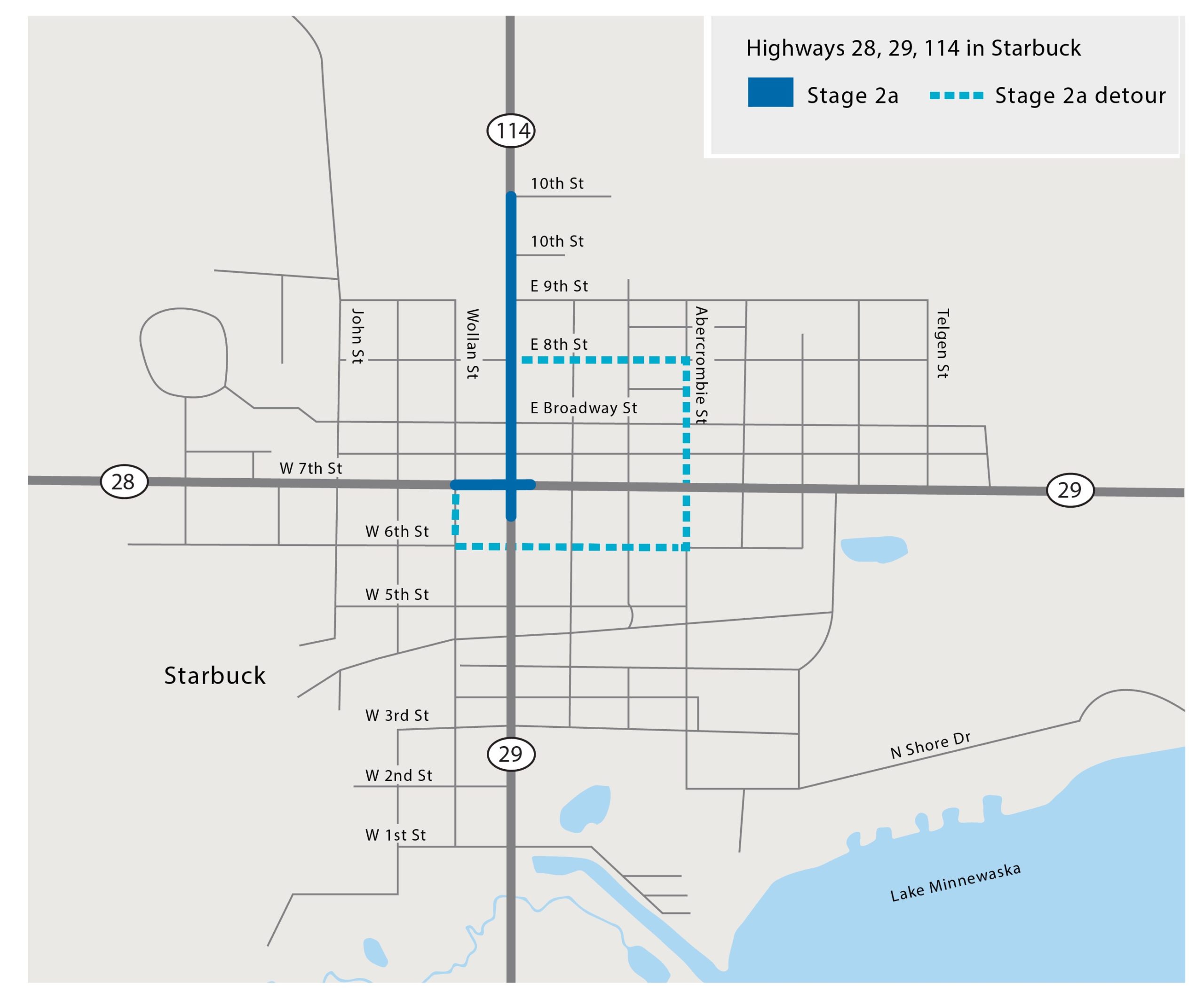