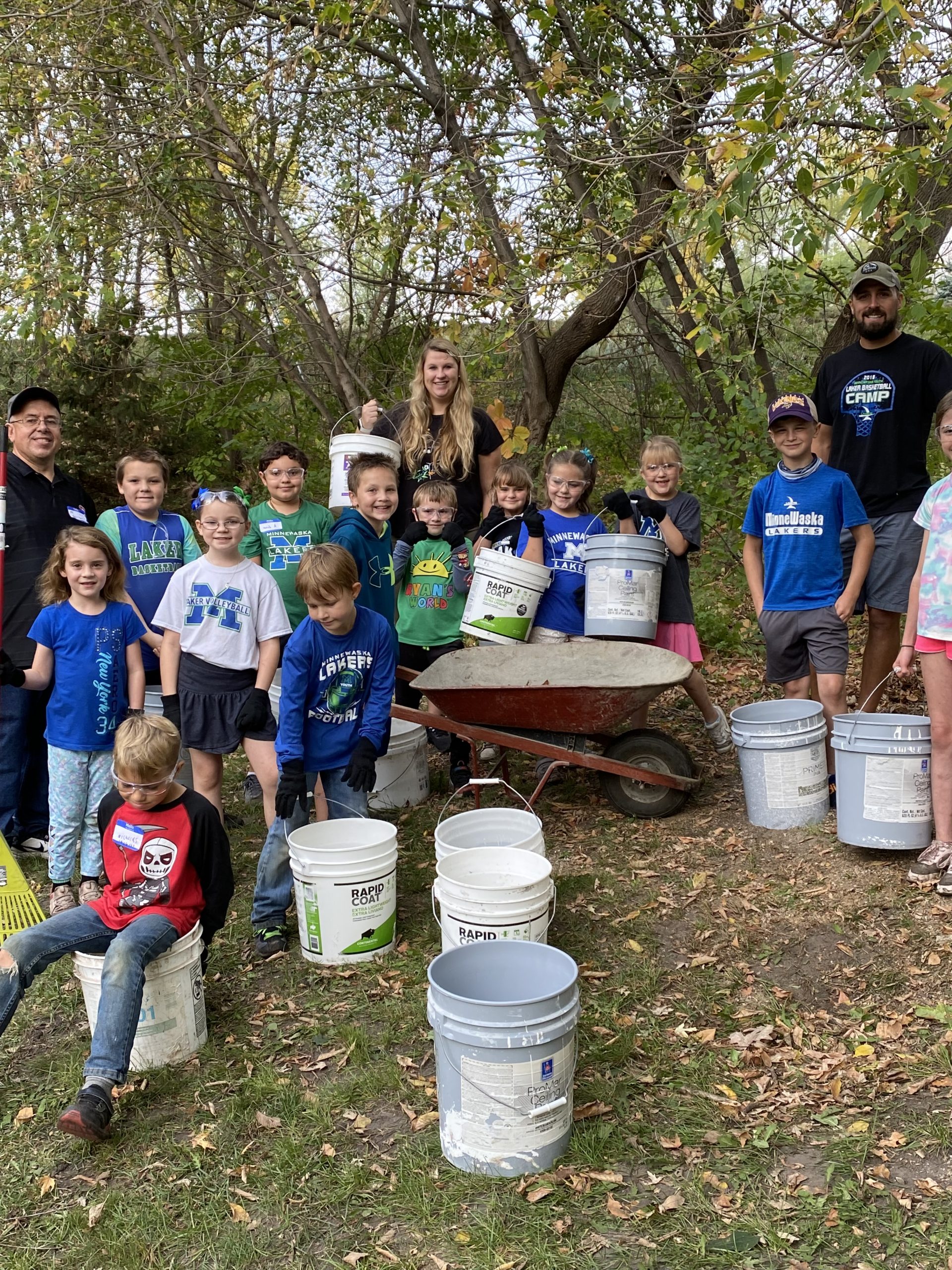 With the help of community members and the students from Glacial Hills Elementary School, Holly Skogen, the gnome park in Starbuck, has a new look.  The cleanup day, organized by the Glacial Ridge Development Association (GRDA), was funded with grants from the Parks and Trails Council of Minnesota, the Gladys Ness Brang Foundation and the Starbuck VFW Men’s Auxiliary.

One of the requirements of the grants is to involve youth and local community organizations in the project. And so, with the help from 14 community volunteers and students from Glacial Hills Elementary the cleanup day began the transformation of Holly Skogen.

The grants paid for the removal of buckthorn as well as habitat restoration with replacing the invasive species and downed trees with trees, shrubs and perennials that are native to Minnesota.

“GRDA is a group that promotes the Glacial Ridge Trail Scenic Byway which was established in 1968 by the Minnesota Legislature. It is 245 miles long and winds through Douglas, Pope, Swift and Kandiyohi Counties,” said Pope County Commissioner Nan Haggerty.  One County Commissioner from each of the four counties sits on the Board of Directors along with regional and city leaders and anyone interested in promoting the tourism of state parks and economic growth of the cities and historical and cultural sites on the Byway.

“This year instead of focusing on grants to do activities that promote the Byway as a whole, the GRDA focused on the improvement of individual sites on the Byway. Holly Skogen (Site # 37) was chosen for this years’ grant writing as it has a great amount of buckthorn (invasive and harmful to oak trees in particular) and several old trees have fallen and swampy areas where the creek was not draining properly,” Haggerty stated.

Representing a variety of organizations that day were: Commissioner Tim Kalina from Douglas County, Commissioner Nan Haggerty from Pope County and Commissioner Eric Rudningen from Swift County from the GRDA; Supervisor Randy Pederson, Pope County Soil and Water Conservation District Board of Supervisors; Mayor Gary Swenson and City Forester Vic Vatthauer and Forestry Committee Member Ron Feigum, City of Starbuck; Land Use Specialist Ralph Hanson as consultant from Pope County Land and Resource Management; and David Thompson and Dan Anderson of the Barsness Park Buckthorn Brigade who supervised and trained in the removal of buckthorn.

Check out more photos in our photo gallery!