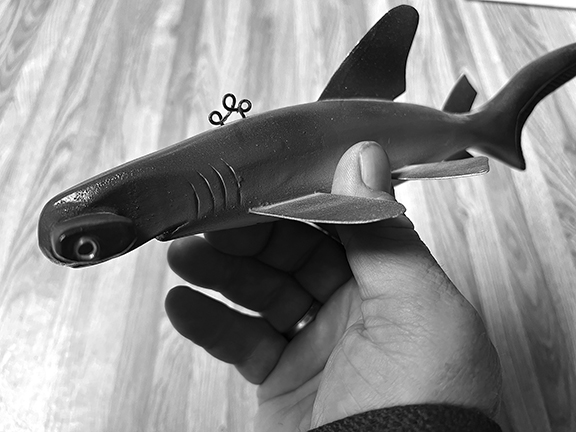 Has anyone ever heard of the National Fish Decoy Association? Neither had I until about two weeks ago. This non-profit hosts the largest spearing decoy show in the United States. It was held in Perham on the weekend of April 23-24. There were many different kinds of decoys there but they fell into two main categories. They had fish decoys and duck decoys. I have a pretty good understanding of the decoy carving universe but I had never attended an event of the nature before.

The fish decoys were of the sort that one might use them to attract a northern pike under the ice. The duck decoys looked much like the size and shape you might use to hunt waterfowl, but almost all of the decoys I saw that weekend will never be actually used for their originally intended use.

This show is actually a competition for carvers all over the United States. Carvers compete in 38 different classes under a variety of different specifications. Many carvers will submit many different fish or ducks in a wide variety of classes. Many of the classes called for a decoy of a certain species of fish and it had to fall within a size margin determined by the organizer.

I was actually a fish decoy judge at this show. Me and two other judges worked together and scored about 10 of the 38 classes. Each class has its own special criteria and is a combination of differing percentages of swim ability and craftsmanship points. Some classes gave more points to swim ability and less on craftsmanship and vice versa.

I can’t remember all of the classes but we judged red tailed chubs, suckers, northern pike, trout of differing species, largemouth bass and several others. Each decoy was attached to a jig stick and was individually swam in a cattle tank full of water. Some decoys that looked absolutely gorgeous did not swim well and others that did not look near as good swam great. The judges worked together to agree in the different placements in each class. Many of the classes had substantial cash prize money attached. One large donor had put up $30,000 for the prize money for this show.

Some classes with cash awards were dictated to be purchase classes. This meant that the winners received the prize money but the sponsor providing the funds got to keep the winning decoys in exchange.

There is no way to explain just how beautiful these decoys were. I swear that if you put them in a natural stream, you would not have been able to tell them apart from an actual live fish. Hundreds of hours are spent creating these masterpieces.

In addition to the contest there was a show floor that I am sure had more then 3,000 decoys on display that you could purchase. Many of these decoys would be called worker decoys and were for actual use in a spearing house some winter day. Others were created only for individuals interested in decoy collecting. Every conceivable species of fish could be purchased.

I did the best I could to keep my hands in my pockets and my billfold in my back pocket but when you find a fish decoy that looks exactly like a baby hammer head shark, that is a decoy that just had to go home with me. This is a collector decoy and not a worker. The show had about 1,200 attendees the first day and boasted over 100 vendors. If it was related to fish and water, you could buy it at this show.

I did manage to wheel and deal with a friend of mine on one other decoy from a carver that had died about five years ago. Many of these decoys increase significantly in price after the carver is passed on as you know that he or she will not be making any more of them. The same can be said for the collectors of spears. In many cases old spears can fetch way north of a grand or two. It was an amazing adventure and I can’t wait to go again next year. The trip was made with my four dogs and each and every time I let them out to stretch their legs it was raining and the wind blowing 40 miles per hour. It was not the greatest travel-with-dogs’ weekend of weather.

To see and learn about old traditions is one thing I really enjoy. The years of carver experience at this show is un-explainable. I made many new friends and am even more hooked on fish decoys then before I arrived. The really unusual thing I saw this weekend was the fact that many of the new carvers that did well in competition were young people. Most outdoor related passions are aging old white guys and the spearing world is the exception. It was great to see the passing of the baton to the future generations of decoy carvers. I do have some skills but carving a decoy is not among them.