The Pope County Fair is back!

The Pope County Fair is celebrating its 134th anniversary this week. New events and attractions plus time-honored favorites are set to fill the Pope County fairgrounds August 5-7 this year. And, admission is free for the whole family!

Work on splash pad for park is back on track

After the coronavirus pandemic interrupted work last year, the Barsness Park Splash Pad committee is back and hard at work planning and raising funds to build the splash pad.

The Starbuck Junior Legion Post 4582 baseball team played their third sub-state playoff game on Tuesday night, having previously beaten Kerkhoven and New London-Spicer. Litchfield had also won twice and was the higher seed, so the game was played in Litchfield. 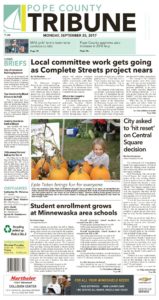